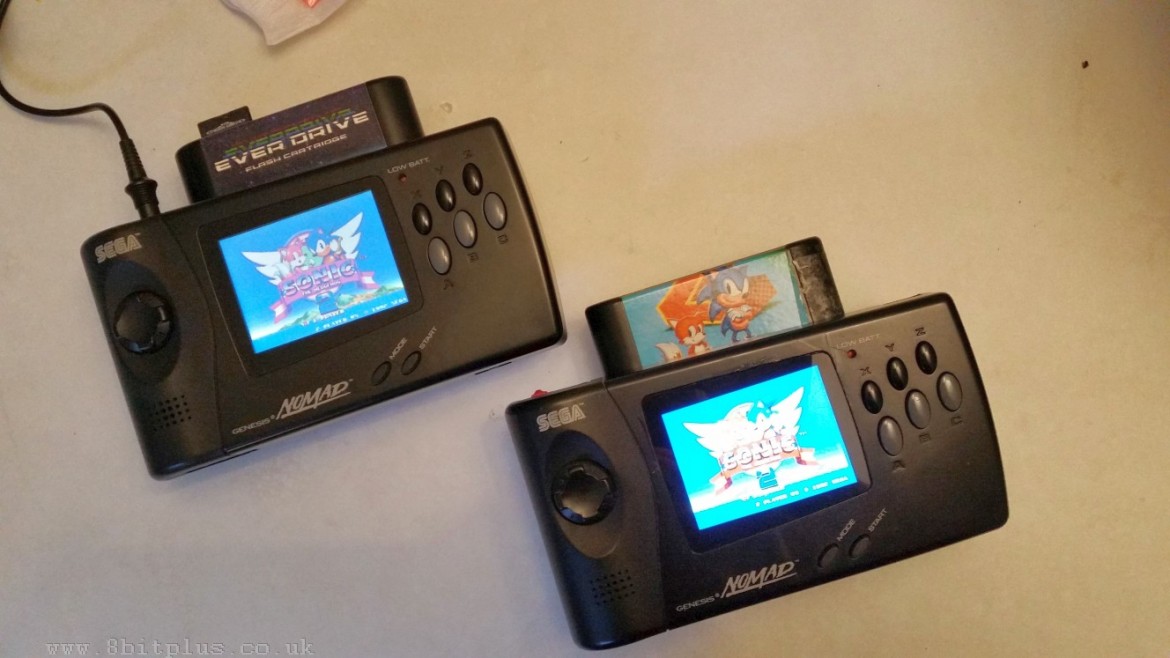 This project covers the removal of the original Sega Nomad LCD screen, and upgrading it with a newer and better LCD.

The Sega Nomad was a portable Sega Genesis launched only in North America in the mid 90s. Its basically a Sega MegaJet with a screen. It also featured a controller port for a second player, and an AV out port for TV play.

A good idea in theory, but the Nomad was let down by a number of factors. Including rushed design and a poor quality (even for 1995) screen.

There’s an area of debate around the screen quality on the Sega Nomad being worse or same as the Game Gear. I personally think the screen is very much the same, but the Megadrive/Genesis games run at a higher resolution and at higher speed than GG games. This makes the screen blur and ghosting more noticeable. Fine detail is almost completely lost in moving sprites.

Apart from its shortfalls, its a nice system and with this modification can be made much more playable.

I happen to own 2 Sega Nomads. the first one is in very good condition and boxed. The other is un-boxed and a bit more used in appearance. This is the one I will modify.

The inclusion of the AV port is the key to this mod. Without it replacing the screen would have been much harder, or not possible at all. Along with the RGB output and audio, the Sega Nomad outputs composite video. There are many 3.5″ TFT screens on the market that can use this signal.

All that’s required is to wire a new screen to the video signal, and power.

The replacement screen is a generic model often sold for car DVD players and reversing cameras. They are produced in many forms and can be found very cheaply on Amazon, Ebay or dx.com. just Google “3.5” TFT”

The first this that should be mentioned is that NOT all of them will work. Some of the screens cannot correctly sync to the genesis NTSC signal and resolution, so you always need to test them out first.The first screen I got from eBay (looks like this type) didn’t work. All I could get was an unstable and badly colored mess. even though it worked on other video scores like Neo-Geo and Raspberry Pi. This must be down to the signal processing logic on the screen, nothing can be done about it….. Try again.

The second unit (this one) also didn’t work, exactly the same problem.

The third one (this one) DID WORK! At last we can continue…

You can already see how much better the screen will be.

After testing the screen externally it was time to strip the unit down and remove the old Nomad screen. the nomad is very easy to open so I don’t need to go over it in detail. just remove the screws and disconnect the cartridge ribbon connector carefully.

Next remove the smaller screws from the motherboard and the speaker wire, then lift it up.

Now for the point of no return, remove the original screen (4 smaller screws) and cut off the connector ribbon and disconnect the back-light power. I found that the ribbon almost peeled off. I then covered the connection with electrical tape to prevent anything touching.

Now to solder the connections for the new screen. Connection points for power and video shown below.
Notice below that I have soldered a jumper wire (white wire) to the driver board.
The reason for this is to bypass the DC step-down circuit on the board. In normal use the board would take 12v from the car power system and convert it to 5v for the LCD display. By bypassing this, and providing a lower voltage we extend the battery life. Some guides don’t do this, and the it can cause flickering display problems.

Now to test the setup again after making the connections.
I found it’s best to attach the new LCD to the front case shell rather than to the motherboard as the old one was. Get it aligned up and glue in place. then glue the LCD driver board to the screen with a layer of plastic as an insulator from the PCB.

Once its all back together and tested, its time to enjoy some smooth clear Genesis gaming.

The improvement is huge. Its so much more playable. Moving graphics are so much easier to follow. I know some people have some reserves when modding an old console like this, but its worth doing if your Nomad inst in perfect condition in the first place.

The only drawback is the gamble to find a compatible screen, but when you do it’s not too hard to install. Also if this screen stops working at a later point its easy to replace again.

Thanks for reading. Please feel free to send any question or comments below.

Here are a few comparison photos of my modified Sega Nomad and an original unit.

Make sure you do some research on the display you plan to use. Be prepared, you might need to get several displays before finding one that works.

Check out the rechargable battery I built after replacing this screen.
Battery Mod.

www.racketboy.com  – for the initial idea.