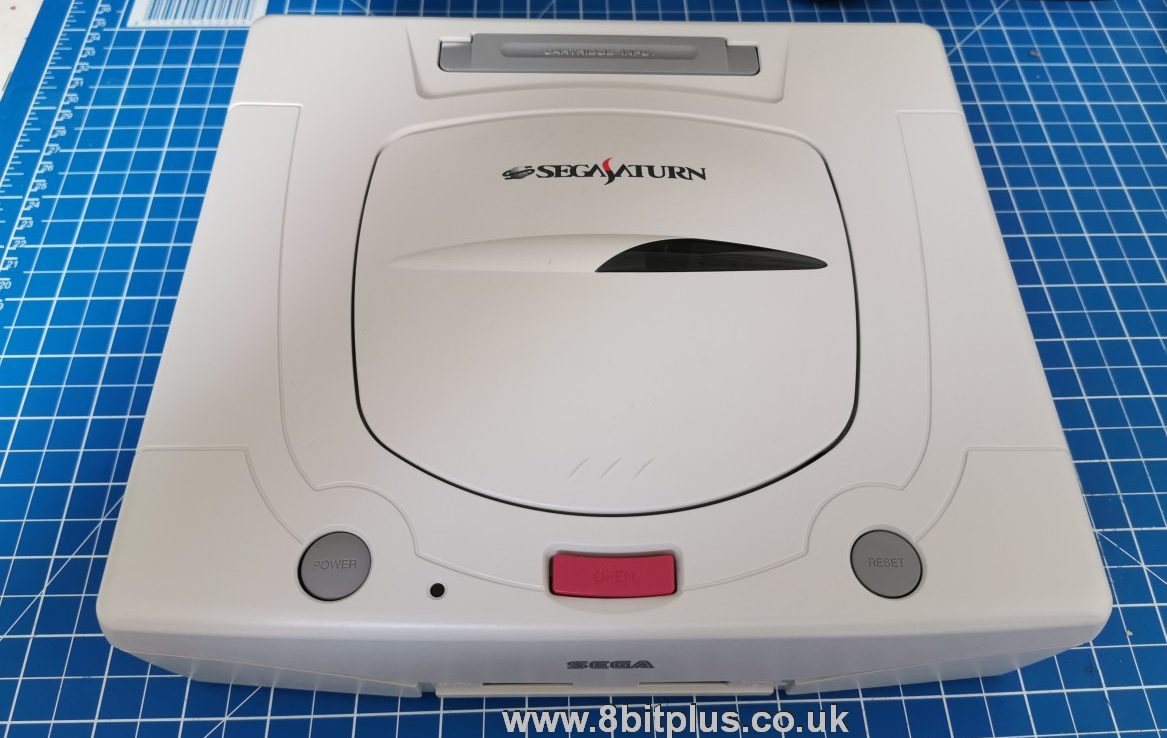 Now this is a treat! a customer contacted me asking for modifications for his Japanese import late model Sega Saturn. Some day later and I was very pleased to see such a clean, box fresh console. Just like the day it was made. No signs of use at all. No dust, fluff or dead spiders in this Saturn 🙂

The customer asked for the following mods:

Lets get started and give this Saturn “the works”.

I started with the removal of the original bios to allow installation of the replacement Region Free chip. First we masked off the BIOS with kapton tape to protect other components, and keep them in place if their solder melts. Luckily this board didn’t have its chips glued as well as soldered in place like some do. Chip removed cleanly with no damage.

The new surface mounted EPROM is a little bigger than the original chip, the legs may need a slight bend to meet up with the pads. Wires are added to pins 43/44 for 5v, and pin 2 for ground.

Another popular mod for the Saturn is to replace the save game memory with a FRAM chip. FRAM memory keeps save game data intact even without a battery. No more lost game saves thanks to a flat battery. You might want to keep one installed though, for the system time and date.

Again the original chip was masked and removed with hot air. New FRAM chip soldered in place with pin 22 held low as outlined on this page.

This is an NTSC Saturn, and only outputs a 60Hz image. This is fine for all NTSC games, but can cause problems in some PAL games. Especially ones that are well optimised for 50Hz. Alone with PAL compatibility with the region free bios, the customer wants to be able to play all PAL games.

I’ve installed a modified version of the SEB switchless mod using a micro-controller. This only switches the video voltage and nothing else. Its attached to pin 79 of IC14.

The micro-controller is also connected to a bi-colour LED, switch and reset lines. Now when the Reset button is held down the LED changes between Red and Green for PAL and NTSC. When released it changes to that video mode. Technically its running in NTSC 50 mode, but even without modification to the colourburst crystal it now give PAL game comparability on TV’s that can display NTSC.

My modchip of choice for the Saturn is the Phantom by Badad84.

Easy to install inline with the CD-Rom ribbon. Just needs connecting to 5v power, and also a solder bridge to select the CD-Rom type.

This was a nice final addition to a nice list of mods. The Pico PSU is simply just a modified PC Power supply designed for single board computers or EPIA for factors. Its 5v and 12v lines are more than adequate to power the Saturn with less heat and interference produced than an original internal PSU.

So there you go, one amazing console awaiting the release of the Satiator in the near future. Just pop in a 4mb Ram card and its ready to go for all games.

Returned to a very happy customer.

If you would like any of the modifications outlined above on your Sega Saturn. please get in contact here

I received the saturn in the same condition as i had sent it. It works perfectly, plays my originals, CDRs and VCDs with no problems. I can’t wait to have a proper game on it.

I recommend anyone who is interested in having their console modded to contact Neil. His work is high quality and professional, he keeps you informed on progress and even emails you high quality photos of the work he has done.
I have already decided on letting Neil handle my next retro project.