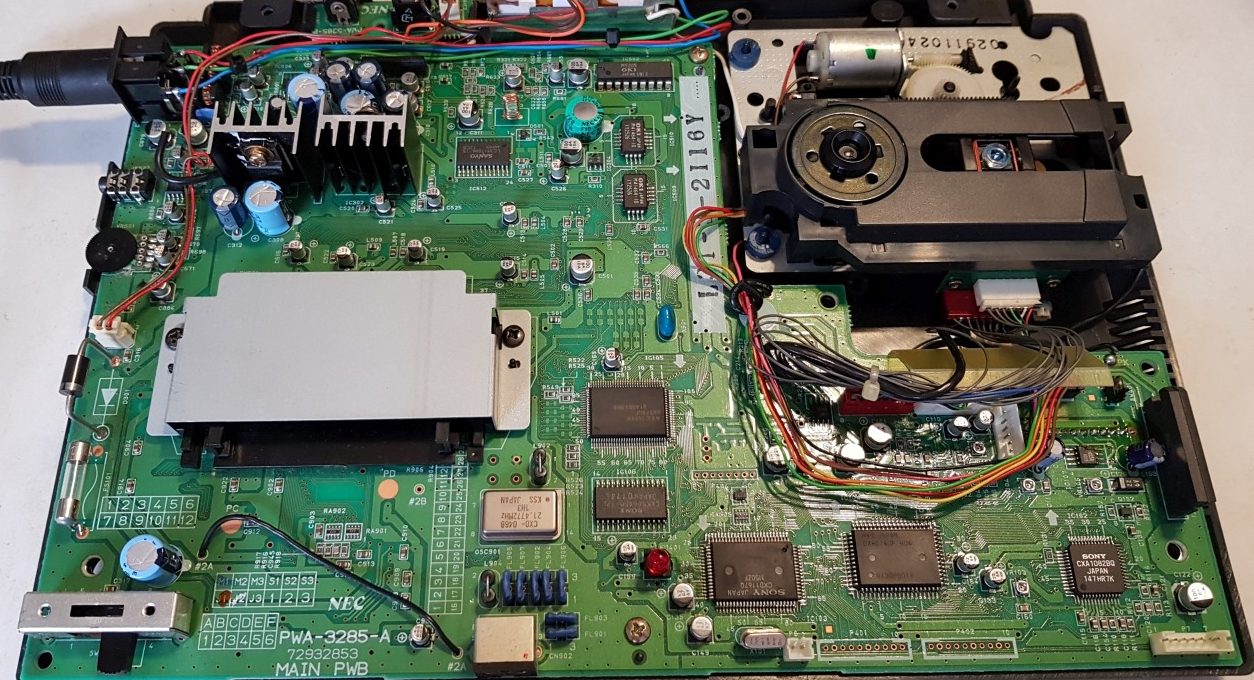 This page details work on a PC Engine Duo send in by Ian for replacement of its original capacitors. Also to fix a problem with the sound system. Firstly I tested the console out before starting any work and was able to confirm the quality of the audio got lower as it was powered on for around 30 minutes. The Volume was also on the low side.

Upon opening the case I could see the usual failing capacitors in the audio and power systems. As you can see there was some very nasty corrosion around the capacitors solder joints, and damage to traces and via’s. One area next to the LED and the CD signal processor was in a very poor state. The PCB’s protective lacquer coating had been compromised and started to flake off.

The first job here is a complete replacement of all the original caps. As I’ve mentioned many times the PCE Duo is a nest for bad caps and I always change every last one. Once the cap is removed I then remove as much of the original solder as possible as it may be compromised and less effective.

The area around the LED and CD processor cleaned up nicely. I had to remove all the flaking lacquer. Then I coated the exposed copper with solder. When I’ve finished with the recapping I’ll then coat this area in a clear coat lacquer covering to protect it from atmospheric moisture. Thankfully the solder pads are still in very good condition and should not be a problem when installing the new capacitors.

The Duo has a very complicated sound system and relies on a number of OP-Amp IC chips and multiple sound sources. I have found that sometimes leaking fluid from capacitors can make its way under these IC’s and cause them to short out. Its best to remove and clean the board under the OP-Amp chips. I then replace with new ones. The Texas Instruments RC4558D is a good replacement for the unbranded ones used by NEC originally.

The OpAmp at IC503 (underside of the board) is clearly affected by the leaking capacitors on the other side. This dual input amp is responsible for amplifying ADPCM sound effects and passing them to volume balancing chip. When the chip was removed I could tell it was trapping leaked gunk. I then cleaned and replaced with a new chip. Its not worth reusing the old chip in this case.

The tiny holes between the two PCB sides (called Via’s) can actually allow the leaked fluid to pass through allowing the damage to spread further. The via will often stop being conductive when this happens, leading to power loss in another part of the audio system.

TIP – A good tip for locating bad via’s. Place your board over a bright light (like you smartphone torch). If light passes through the via then it should be fine. If it stays dark then the inside of the via passage is full of corrosion.

The other amp to be replaced is located at IC506. This chip is the main audio amplifier for the Hu-card game system and outputs to the AV port. Again it was holding an amount of corrosive gunk underneath  and I replaced with a brand new part after cleaning. This amp is also known to be affected by heat emitted from the voltage converters. Great move of NEC to place the power and audio systems on top of each other, nice one.

Now that I’m happy that everything is looking as it should, it’s time to test it out. First I played Bomber Man ’94. I got the system fully warmed up and this time didn’t experience the drop in volume or sound crackling. Next I played an audio CD from start to finish checking that the laser head can travel from the inside to outside of the disc. No problems at all, the music sounded good and at a good volume.

Next I played a CD-R copy of Gate of Thunder. This game tests all aspects of the console. PC-Engine sound affects, CD streaming music and ADPCM sound affects for the voices. Another good game to test with is Ys III. It used plenty of ADCPM generated speech.

The only other things that needed doing was to apply the clear coat lacquer to the damaged PCB section as highlighted above.

Also I placed layers of electrical tape under the CD balancing pads to raise the CD mechanism up by 1 or 2 mm as the owner had reported CD’s scratching on the case.

Lastly before sending it back I’ll switch the video sync signal from composite sync to RGB-Syn directly from the CPU. This should improve the picture output on RGB screens, at the cost of using composite cables.

If you have any questions, please ask below.

Or If you have a PC Engine console in need of new caps or other fixes, please get in contact here.