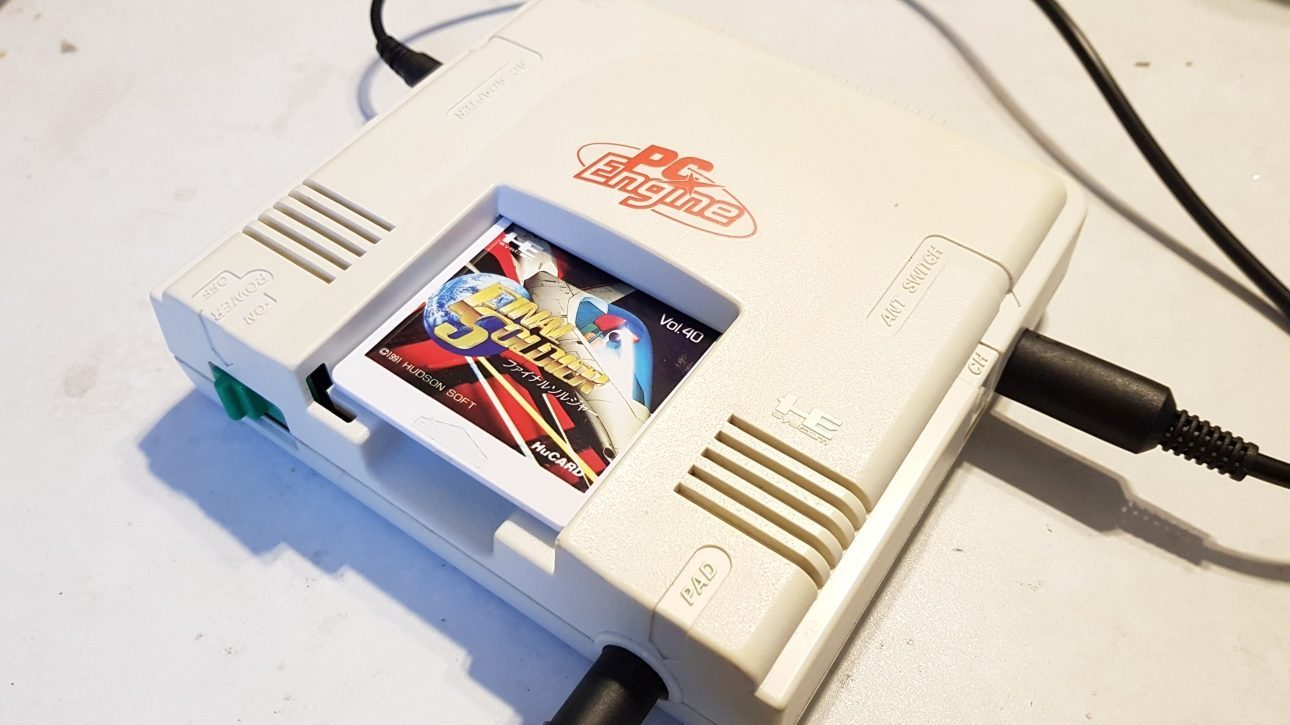 For my next commision, I was asked to install a RGB amplifier into an original white PC Engine console.

The PC Engine is one of my favorite consoles to work on. So small and easy to handle. The only downside to the design is that it only sports an RF video output. Back when this console came out, RF was the most common form of video connectivity. NEC included the RGB signal in the EXT connector on the rear of the console, and later models (Core systems) had an AV port with composite video and stereo sound.

Back to this unit, lets get started.

Firstly I opened the console and located the RF module. This needs removing to make room for the new 8pin Mini-Din video port.

The module is soldered in place with three large joins, and 3 smaller pins carrying the signal from the motherboard. The large solder joins cab be a pain to fully desolder, but you can safely leaver it up as you heat up the solder joint.

The new 8 pin mini-din socket should fit perfectly when places on its side. One of the earth pins needed bending at 90 digrees. It then lines up perfectly with the hole for the solder point.

The one solder point isn’t quite strong enough to hold the socket in place alone. I scratched the area around the new port. Once the copper was exposed I could solder the port casing to the PCB.

Now I installed the RGB amplifier PCB next to the new 8pin port. The RGB signal was tapped from the EXT connector on the underside of the board.

The full pinout of the EXT bus can be found here. I used the c-sync line for cync, but you may find comp sync also gives a good picture on your setup.

Finally I crated a standard RGB scart cable compatible to pinout of the new port. This is my layout. You could wire it any way you like.

To test the video quality I use my trusty Sony CRT TV. By the way, my camera HATES taking photos of the CRT image, so I apologize for the photo quality.

When viewed without the camera, the image is clean and very sharp.

If you do this mod and find that you notice “jail bars” in the solid colours, then you may need to do this mod. This PCE needed the modification to reduce the “jail bars”.

The very last thing I’d like to mention: Sometimes when this mod it done on the original white units, you can hear a hissing sound in the background audio. The strange thing is that some units get it worse than others. This one had the hiss, the next one I did had it much less. The problem was discussed in length on various forums, and no permanent solution was found other than adding an addition cap to the audio ground. Just something to be aware of before hand.

Contact me here if you need an RGB mod.