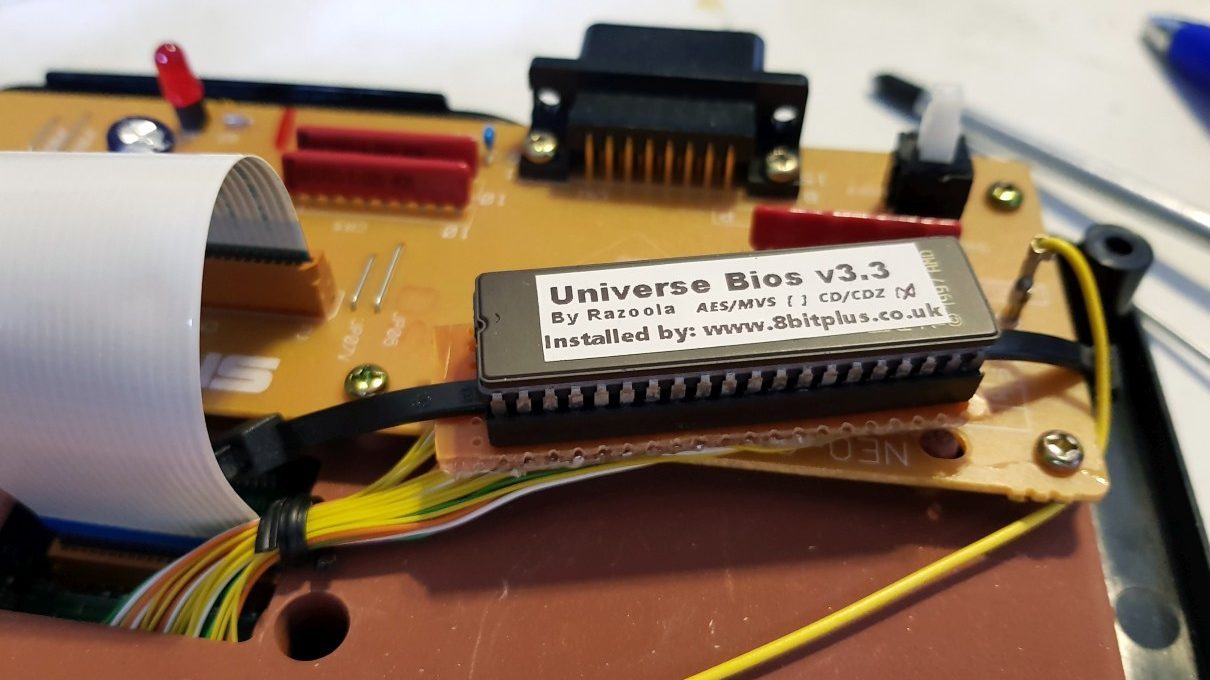 Unibios in the Neo-Geo CD Toploader.

I’ve been asked to install a Unibios in a customers Neo-Geo CD Toploader, and I realised that I haven’t shown any photos of one of these installations yet. So I’ve put this page together to show what a Unibios install looks like on the Toploader.

Its basically the same process as the Installation I did for the CDZ below so why not take a look at that too.

All that’s entailed is the removal of the original bios and also the construction of the socket extension to allow the use of the larger programmable EPROM chip.

I’ll skip the dismantling of the console because I want to keep this article short, and get straight to the motherboard of the Neo CD. SNK use a load of screws on there neo-geo cd consoles so this can take a while to fully dismantle.

Now I identified the original BIOS chip and removed it with my hot air desoldering gun.

Using the hot air system insures that the BIOS pads stay in good condition and avoid over heating that can happen with soldering iron.

Once the bios is removed I constructed the bios 40 pin socket and attached each of the 40 wires. These were soldered to the motherboard in a 1-to-1 fassion. each wire was also tested for continuity with a multi-meter.

I initially tested the installation was booting at this stage, and when happy with all my solders, I coated the connections with hot glue to prevent any movement of the wires. This was done at both ends. The bios holder is passed through the hole for the controller board ribbon. I then attached it to the controller board via a cable tie to make sure it will not move or come into contact with any part of the CD mechanism located in the console lid.

As you can see, the bios can be easily accessed for upgrading in the future without completely dismantling the console.

The Neo-Geo CD Toploader was reassembled and put on continued test for several hours.

If you need a Unibios installation in any SNK console, or arcade board, Please get in contact here.