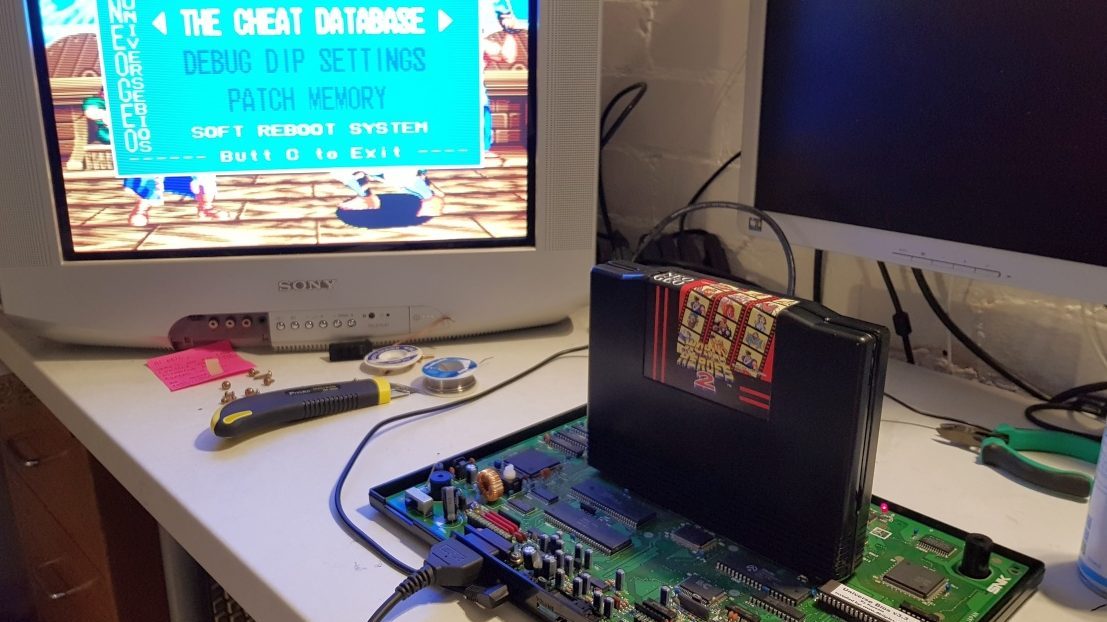 I received a SNK Neo-Geo AES system from a customer when requested a Universe Bios installing. The Unibios can bring all the same enhancements to the home AES system as the arcade MVS boards. Everything from cheat modes to region assignment, plus hundreds of other benefits, bug-fixes and improvements.

Unlike the larger MVS units the AES console has a bios soldered to the motherboard. The first job here is to remove the old BIOS and install a socket for the new chip. The new BIOS can be installed straight on the board, but having it removable is best and allows for future updates.

You can now see the old BIOS removed. The board is cleaned to remove any flux used in the removal process, then the socket is soldered in place. Now a new and Unique BIOS chip is programmed for the customer.

I tested the BIOS features to confirm everything is working correctly.

The Neo-Geo AES, like all SNK consoles can display images with RGB output. Unfortunately the later AES consoles (with high serial numbers) have problems with internal interference and noise internal to the video out circuits. The result can be a drop in quality overall, and the presents of vertical lines in the image. These lines are commonly referred to as Jail Bars.

The solutions is to bypass the section of the circuit that picks up this noise, and even remove some unnecessary components. Luckily this AES is a revision AES3-6 and all that’s requires is to cut three traces on the underside of the board.

Before I start, lets take a look at the picture quality as it stands now.

I used a large LCD TV for the above photos rather than my Sony CRT. The larger LCD shows up the image defects better than CRT. You can clearly see the vertical lines in the above images. These are strong jail bars indeed. Time to break them.

Just cut the traces as shown above. Solution is credited to MKL at the Neo-Geo forums.

Freedom! much better image and no jail bars in sight. I could also see a slight improvement when viewing on my 20″ CRT, although its much harder to see and photograph.

The owner asked about recapping the board, but I don’t think it was necessary in this case. SNK consoles do not suffer from bad caps in general. Unlike Amiga and NEC which are now known for leaking caps and the damage they cause. I am yet to see anything like that in a Neo-Geo. everything looks correct and all sound levels are high.

Another point is that the AES3-6 has its stereo output through the headphone port reversed. I was able to confirm this with comparison of the music from the same game on my MVS system. The simplistic solution would be to fix this at the scart cable end by swapping pins 2 & 4. However the console would still be incorrect when using headphones or other speakers, so its best to fix on the motherboard.

All you need to do is cut the traces to the jack connection, and rewire to to opposite pads. and Now left and right audio are the correct way round.

Reassembled and returned to owner.

If you need an Universe BIOS installing, Please contact me here.

“I recently acquired a Japanese AES console from eBay, and I wanted to have it modded with an UniBIOS to unlock its full potential. Neil provided me with absolutely stellar customer service all along the way, from my initial email inquiry up until I received back the modded console. This included expert opinions on additional mod work that needed doing (RGB and stereo fixes for the rev. 3-6 motherboard), regular progress reports and a blazingly fast turnaround time. Best of all, he really went above and beyond the call of duty in helping to track down the package when the courier company managed to misplace it. I heartily recommend getting in touch with him for all your Neo Geo modding needs!
-P”