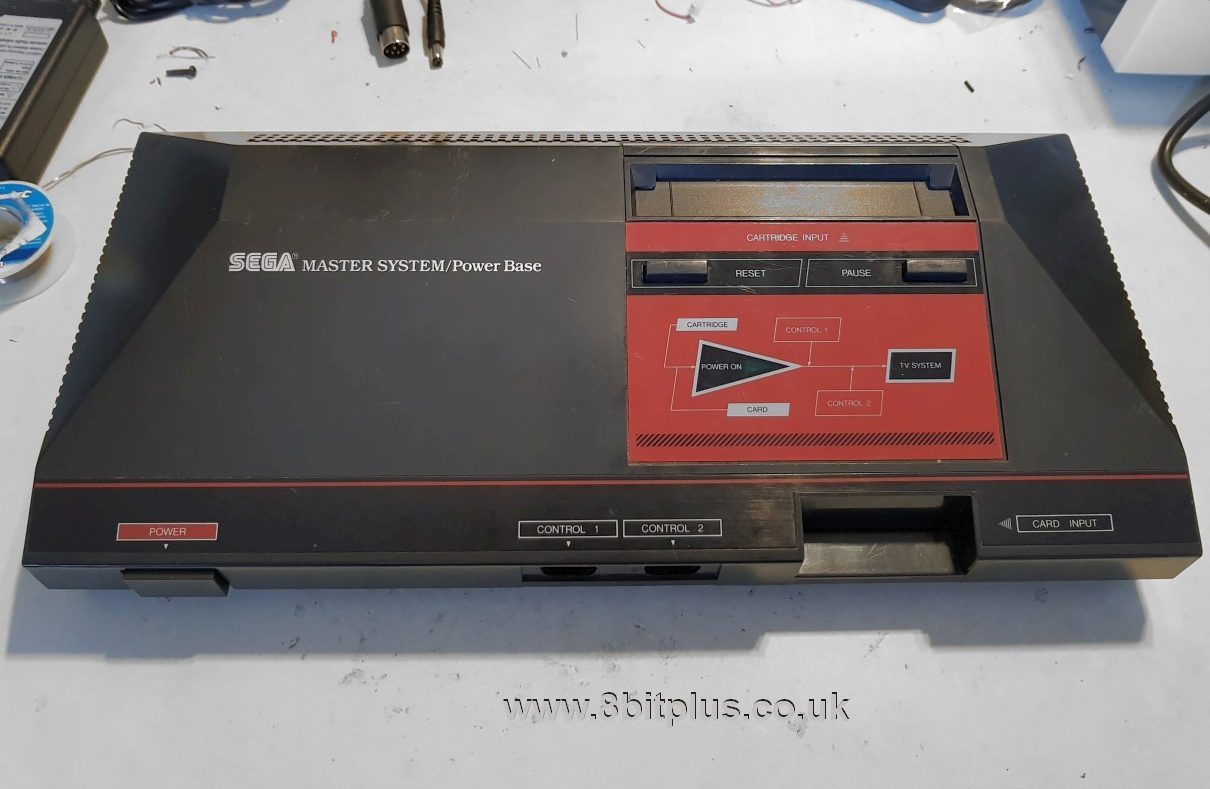 Installation of the Switchless modification for the original Master System for a customer. Switch between PAL and NTSC region and video modes by pressing or holding the reset button. No external switched, no case drilling.

Following on from my Switchless installations on the Mega Drive 1 and 2, I got a request from a customer to install a similar mod in the Sega Master System (original PAL model). After some research I found it was perfectly possible with a modification of the original SEB hex code for the PIC16f630 micro-controller chip. The Sega Master System has no separate region jumper setting for language, only the option to be set running in PAL or NTSC video modes. So effectively this is a simplification of the original code for the Mega Drive or Sega Saturn.

First I programmed the PIC16f630 with my MiniPro universal programmer. Download the file here, it also works for both Sega Master System 1 and 2. Just flash the .hex file to the chip and verify when done. Make sure the PIC is empty before flashing. I’m not making a step-by-step guide for this installation just now, but I may if someone requests it.

Now I dismantles the Master System and got it ready to install the PIC. On the under side you need to cut the a couple of traces for the reset switch and video frequency lines.

Now with everything reassembled and plugged in, we can test the functionality with the built in copy of Hang-On. I also tested with a copy of Tennis Ace. I’ll be using Tennis Ace again later for the FM sound chip upgrade.

Pressing the reset button quickly resets the console. Holding down cycles the LED from Green (pal 50Hz) to RED (NTCS 60Hz) and the video mode changes when the button is released.

This was an interesting request. The owner of this Master System wanted to have a FM sound board installed. I found the required mod available from ETIM.net (Australia based). The idea behind this mod is to add back the FM modulator that was originally present on the Japanese Master System (MARK III in Japan). This hardware was removed in the US and PAL versions of the console, but plenty of games still retain the code to play music and affects with FM modulation, even some games not released in Japan.

The FM board attached to the internal expansion bus located inside the console. It also requires a capacitor removing and wiring to the sound mixing system. When complete, you can switch between the original sound and FM. Here’s a quick video demonstrating the difference in the games music.

If you want a switchless mod installing in your Master System, please contact me HERE.