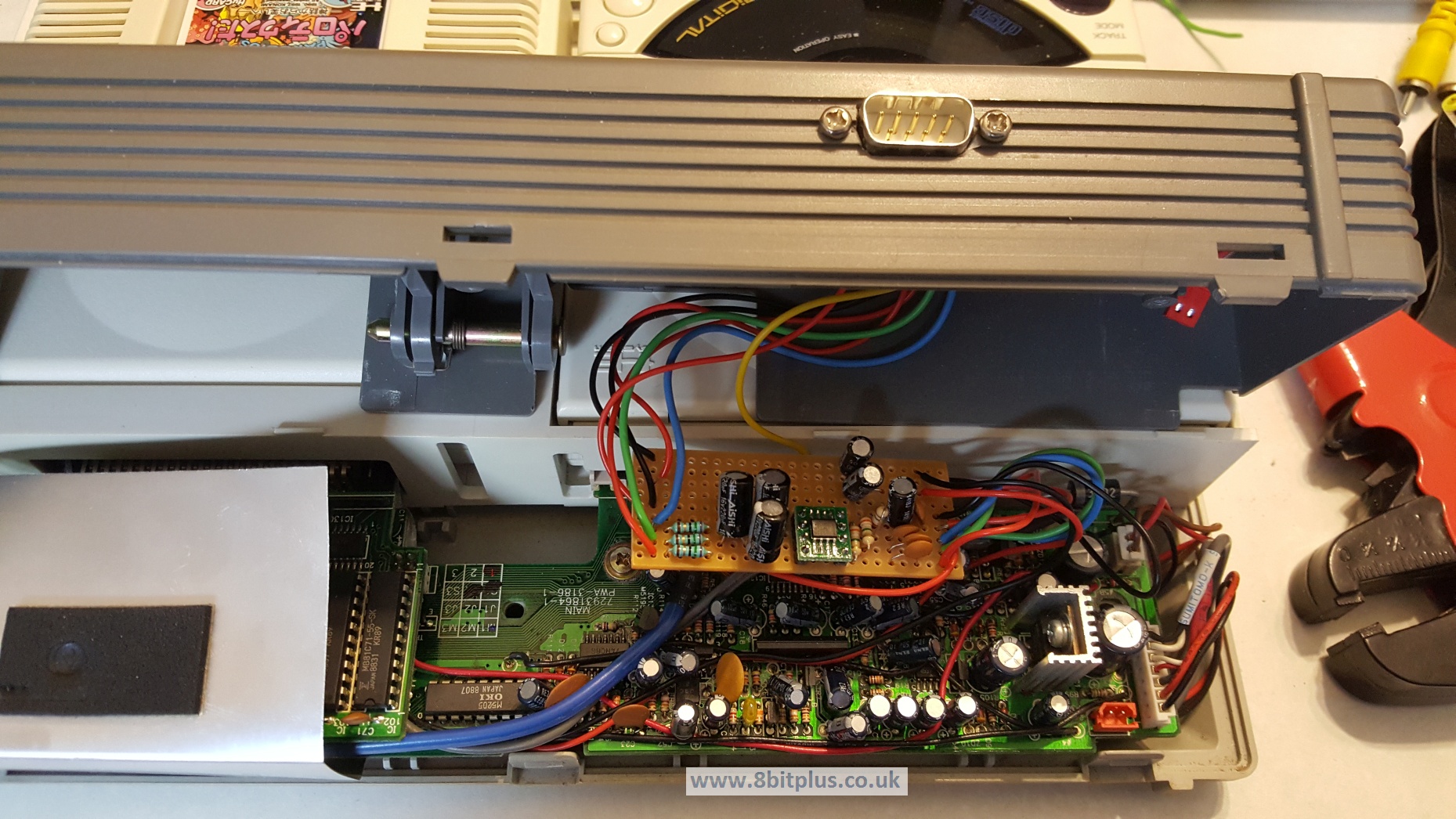 Another recent purchase of mine was a second NEC PC Engine setup complete with CD-Rom2 and Interface unit. I already have the same system boxed in good condition, I got this one to keep out and actually play. So I don’t mind making a few improvements to this one.
My plan is to give this console a RGB port on the Interface unit. This way I can get true RGB picture from whatever PC Engine core system I plug into it.

Another job I’d like to try is to refurbish the CD-Rom2 drive with new caps, motor gear and laser unit if I can at some point.

The original PC Engine is a stand alone console. Its all you need to play the HU Card games. Unfortunately NEC decided to only include a RF video port on the unit, and route everything else through the large expansion port on the back. Later models like the Core Grafx included proper AV out.
When NEC designed a CD-Rom add-on for console they integrated composite video ports to the Interface Unit (a large tray to hold the console and CD-Rom2) but still no RGB AV port. Although I do like how it provides power to everything and only needs one PSU (Unlike MegaCD).

This project is very similar to my N64 RGB mod.

The RGB signal can be taken from the video processor, expansion pins or inside the Interface unit. I decided to do the latter as it wouldn’t require me to open the PC Engine console itself, and also allows me to switch the main system (to the Core Grafx for example) and still have RGB output.

Wherever you decide to get the RGB signal from you still need to amplify the signal as its too weak to attach directly to most TV or monitors.

After hunting around I found this schematic diagram for a RGB amp that was effective and recommended by Assemblergames forum members. I believe this was drawn up by forum member “micro” so full credit to him for this diagram.

To make things easier, I converted the schematic to a veroboard layout above and also included a list of the components needed. IC1 is a THS7314 which is a three channel amplifier. I got all the parts from www.bitsbox.co.uk and altogether cost less than £3.
If you don’t fancy building it yourself you can get a ready made RGB AMP from eBay, but be prepared to pay £20+.

Now for the best part, putting it all together.

The THS7314 is a SMD component and therefor needed an adapter to be used comfortably on a strip board. You could solder it on with wires if you want, but I recommend the SIO8 adapter.

Now that the video amp is complete I’ll wire it to the underside of the Interface unit board at the expansion connector. The photo below shows where I get the video, sync, and the audio signal.

Next I needed to install the AV port into the Interface unit. You can use any port type you like; Scart, Din8 (like Megadrive), D-Sub, DB9 or VGA ports all work fine.
My choice was to go with a DB9 (serial port) as I already had a plug and socket to hand. One tip to keep in mind is to take the audio from the AV ports and not from the PCE expansion port. This is because the CD audio gets mixed in before this point.

Lastly here is how I wired the port and made the custom RGB video cable.

What can I say…. Perfect.

Sharp, high colour and almost no noise. This mod has made the image much more solid compared to the washed out composite video. You can see pixel clarity has been improved. Well worth the time to get these results! I have to mention that I’m using a CRT TV and find it hard to accurately capture good quality screenshots with my camera. You have to take my word on the picture quality.