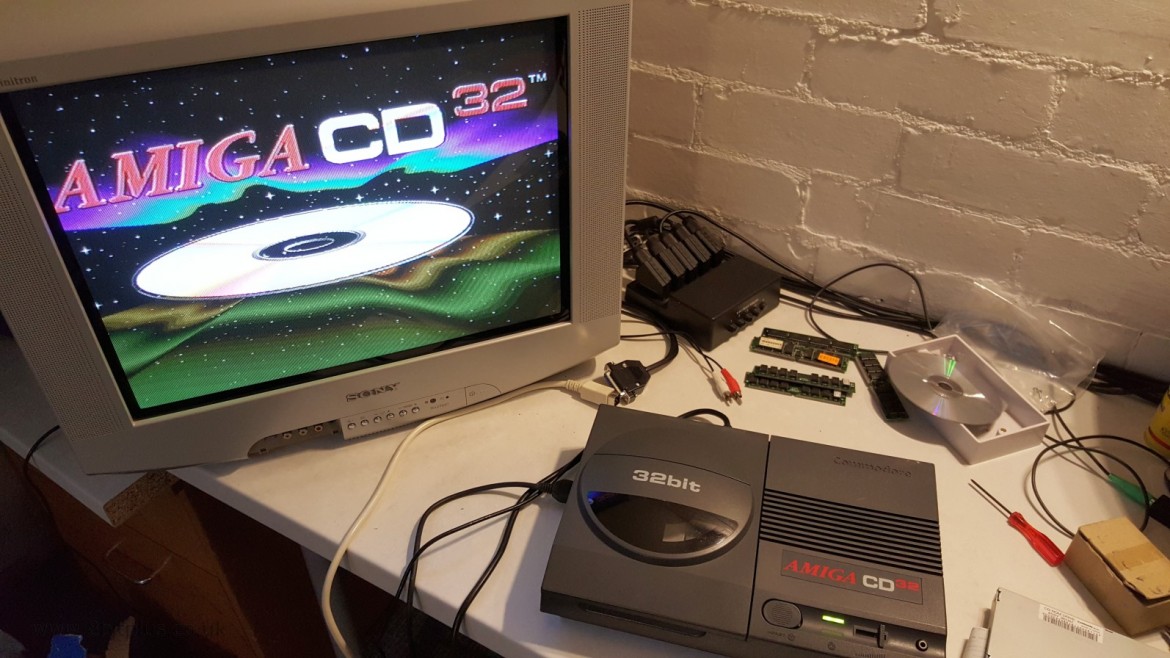 I recently uncovered a box in my storage location containing my Amiga CD32. It came from a boot-fair (flea market) many years ago. I remembered it did work when I first used it, but soon stopped. It was then put into storage for about 12 years. Back then I had no way of finding out was was stopping it working, but now I have much more experience with consoles fixing and electronics.

The CD32 was of very little value when i picked it up, I think I payed £15 for it working with a few games. Now they often go for over £130 with the same setup. I don’t have any interest in selling, but as a collector I want it to be in working playable order again.

After unpacking the console, I plug it all in and switched it on. The power LED came on dimply and there was a slight flickering on the screen, but no startup animation. This is was I remembered happening last time I tried the console 12 years ago…

After opening the console and inspecting the motherboard it was easy to spot the main suspect.

The two large capacitors near the Power connector were bulging and showing signs of leaking, therefore need replacing. I removed the motherboard from the CD32 case and unsoldered the caps. (Original values: 1000uf 10v). the caps I replaced them with are the same value of 1000uf but rated at a higher voltage of 20v. Its no problem to use the higher voltage caps as its a “max” tolerance value and nothing to do with the output.

I also lay the caps on their side as they are taller then the originals, and might get in the way of the expansion bay.

that’s more like it. now it powers on and plays the boot animation. I put a game in the drive and…… not much happened.

Looks like the next problem is a faulty CD-Rom drive. It didn’t try to spin the CD, and only made a click sound. I suspect this is the laser trying to detect a CD. I confirmed this by pressing down on the center of the spindle (this is how it handles the tray open or closed detection) and observed the laser moving up and down without and light from its laser diode. In conclusion I believe the drive is dead. Either that or not receiving power to the diode.

The install is very easy. Just remove the 4 screws holding it to the case lid and its free. The data ribbon cable to the motherboard needs removing with care, because the retainer clip can break easily.

Another lottle job was to replace the missing RF-Shield top plate. The absence of this shielding can cause read errors on some units, and mine certainly worked better with one. No idea why it was missing in the first place.
Thanks to mjnurney at AMibay.com for hooking me up with a replacement.

After resembling I was pleased to see it reading game CD’s for the first time in over 12 years.

The CD32 version of Chaos Engine plays perfectly. No stuttering in the animated intro, or with the CD background music because of the replaced rf-shield. Other capacitors can sometimes cause faults in music playback, but not in this case.

Something to look forward to is the Project Hermes upgrade for the CD32. Developer Ian Stedman is creating an expansion card to add 8mb of Fast Ram. In addition to an IDE connector, floppy connector and RGB output. This would effectually turn the CD32 into an Amiga 1200.
An internal drive would allow for Workbench and WHDload to be installed.