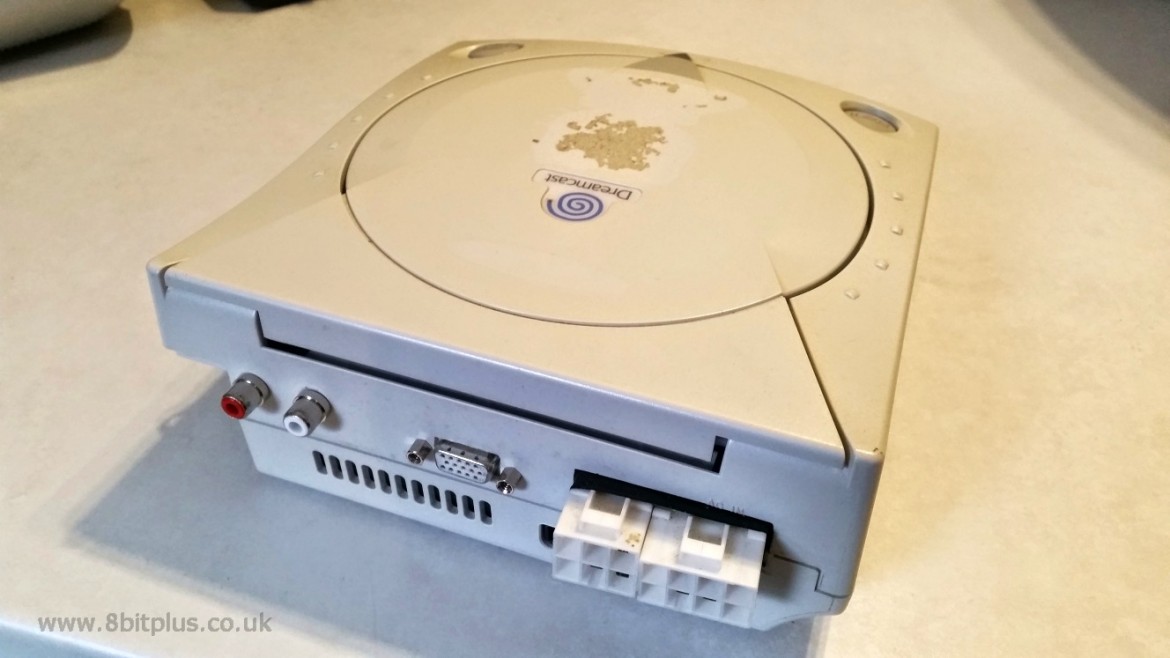 Converting a Dreamcast for use in a Sega Naomi arcade cabinet. Project covers connectors and modifications to the console and universal JVS cabinet.

Sega managed to convert many of their arcade games of the time to the home system almost perfectly. Having almost identical hardware was a smart move . As a result a great deal of the Dreamcast game library consists of arcade games from Sega and other third party developers, like Capsom, SNK and Namco.

the Naomi arcade cabinets like mine are very popular with collectors for home use, but the original games on cartridges can be expensive and hard to locate compared to the Dreamcast Release. Also the Naomi GD systems are less reliable and slower to load than the Dreamcast GD-Rom. The Dreamcat also has the ability to read “backup” copies of your games.

What I wanted to do was modify a Dreamcast to work as a plug and play replacement to the Naomi board in my cabinet, but still be able to re-install the Naomi board to play original games.

the first thing I needed to do was workout the power connections. Luckily the Naomi cabinet PSU outputs everything we need to the JTS connectors: 12v, 5v, and 3.3v

All that’s needed is removal of the Dreamcast internal PSU then linking directly to the cabinet PSU. To do this I purchased a set of JVS power extension leads from Giz10p. I then cut down the female socket end and soldered to the corresponding connectors in the Dreamcast.

The next thing that’s needed is to build a VGA output adapter inside the Dreamcast. Most aftermarket VGA “boxes” are to large to fit inside the console case, but a small circuit can be built quite easily.

The VGA circuit is based on the design by mmmonkey

When this was built and installed, I cut holes in the back of the case for the VGA and also for Audio connections. The RGB-VGA switch was left inside and set to VGA. There’s no point in placing the switch on the case as the DC will never be used with a TV again.

This was the hardest thing to modify. The Naomi system system uses a special board called JVS to act as an input controller, and that would be linked to the Naomi by USB. The Dreamcast uses a system called Maple and is therefore not directly compatible. It works much the same, but all the Dreamcast games are programmed to work with Maple and not JVS.

What I had to do was wire all the input buttons to the Dreamcast controllers and still have a quick way of switching back to the Naomi JVS. This means needing to switch 24 connections.

Next I dismantled the controllers and removed the VMU connectors leaving only the PCB’s. The VMU port was extended with ribbon cable.

For each direction and action button, I soldered a wire and linked to a PC ATX (24pin) connector. I used an IDE cable to wire in a VMU socket. after all the soldering was done I covered all the points with hot glue to keep things still and reduce movement at the solder point.

As you can see I have both PCBs wired to the connector and VMU cable. The controller cable (back to the console) was reconnected to the PCB’s and run down the inside of the cabinet to the console below.

The controller PCBs sit nicely in the control deck at the side.

In the Naomi control panel I wired the buttons and joystick to the same connectors, and also to the JVS connectors

Now I can switch between Dreamcast and JVS in a few seconds.

To finish things off I cut a hole for the VMU in the CGS lid. Mine was already damaged and cigarette burned so it was no loss to cut.

Here’s a video of it all working. Thanks for reading. 8bitplus 2015.