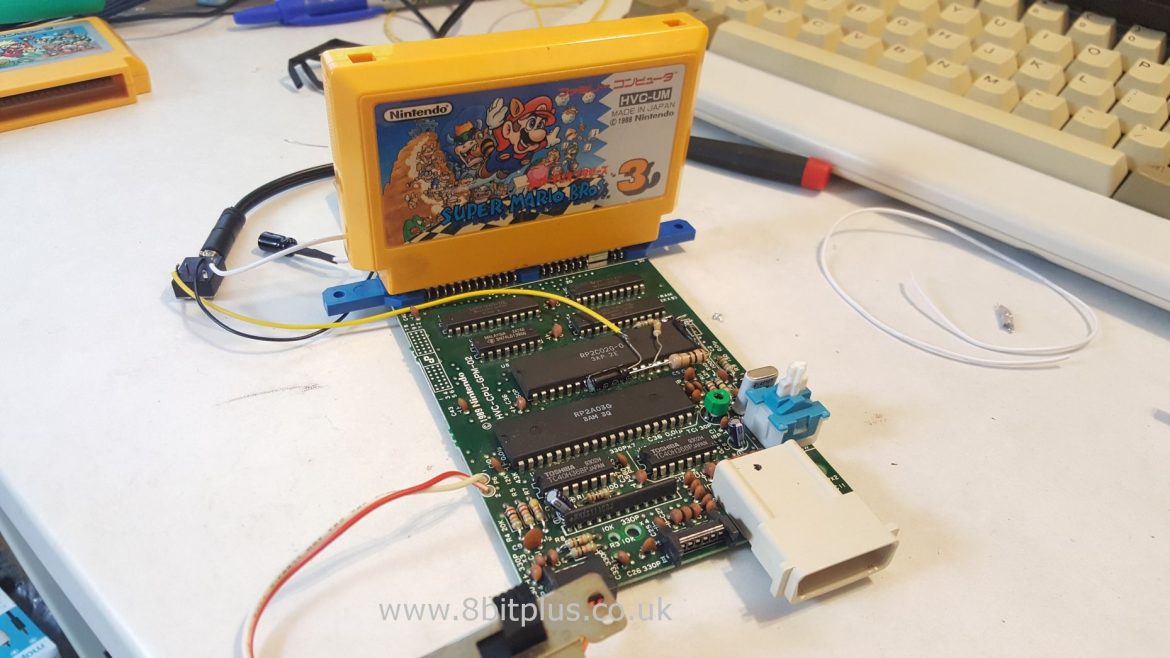 So a while ago I found an original Nintendo Famicom console. I was also a little disappointed to discover that I couldn’t tune it into my TV set.

Apparently most European TV sets are not compatible with NTSC signal via the RF channel. Even though my TV is happy to display NTSC from the RGB scart and Composite ports, RF is a no go. The only video option for NTSC Famicom is RF, therefore I cannot get an image.

After doing a bit of research I found that it wasn’t too hard to got a composite AV image from the Famicom. RGB was a much harder mod because it required more hardware, so I went with the AV option. This modification is achievable in a few different ways, so you might find one the suits your console better.

I decided to go with a mod from here. It was also for the same version of the Famicom board that I have.

After carefully opening the case its recommended to disconnect the controllers to make it easier to work on the Famicom motherboard. Interestingly the board connects to the top of the case rather than the bottom

Here’s a quick overview of the video mod:

As for the Audio Mod. All that’s needed to get mono sound is to solder a 220uf cap to pin 46 of the cartridge connector. (positive leg to pin) and also connect a socket.

Finally time to hook it up to the TV and try it out….. In conclusion the image quality is quite good. Its probably much better than the RF signal would have been.

When checking the video quality, I’ve noticed “Jail Bars” visible in the solid colour backgrounds, but its very minimal and doesn’t spoil the game at all. Image quality is sharp, clear and has plenty of colour. All together it looks rather better than some other systems when connected to composite output. It must be mentioned that taking photos of CRT screens is hard to get right. The image quality is much better in real life.

To reduce the amount of external modifications to the Famicom case, I mounted a stereo jack connector for the video and audio channels. A jack to stereo cable works perfectly and I wired the video output through the RED wire and made a label indicating that its for Video. You can of course mount the output anywhere you like.

That’s all for this mod I think. I wanted to leave it as original as possible. Like I said there are other more complicated mods. Even RGB can be achieved with more time in addition to more hardware. This was a quick and effective way to get Composite from a RF only Famicom and get it playable on a PAL TV.

If you have any questions please leave a comment below.