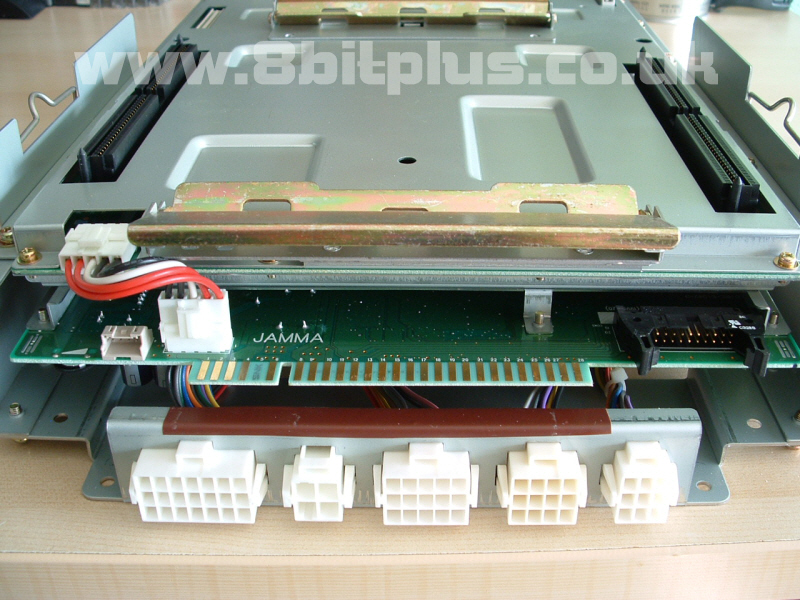 I wasn’t even looking of this when I found it on eBay. I was after a few more games for my MVS system, but I am a real sucker for strange and obscure hardware like this. I just had to get it.

The Hyper Neo-Geo 64 is a strange and slightly sad step in the history of SNK. Compared to its much more popular predecessor (the MVS) very little is known about this machine in general. It was conceived as the future platform for SNK to use for its popular game franchises, and at the same time bringing them up-to-date with impressive 3D textured graphics. Unfortunately they left the jump to a new platform far too late to be affective. By 1997 there was a huge explosion of 3D arcade games, with brands like Konami, Namco, Sega and others enjoying large profits and taking up more and more space in the arcades.

A year or so later SNK was just stretched financially to support the Neo-Geo AES, MVS, Hyper 64 and the newly released Neo-Geo Pocket. By 1999 the the decision was  made to stop development for the Hyper 64. The Neo-Geo Pocket was also discontinued soon after due to SNK’s bankruptcy in 2000.

Games were released for the MVS until late 2004, thanks to Aruze who purchased the company and re-branded  it as SNK Playmore. Anyway lets have a look at my Hyper 64.

My eBay seller shipped the system complete with the original box. The label on the side under the Hyper 64 logo shows that the system originally shipped with Samurai Spirits 2: Asura Zanmaden, or Samurai Shodown 64: Warriors Rage as it is know outside Japan.

Here is the Hyper 64 Motherboard sitting on its smaller protective box, the machine is complete with is instruction manual. The odd flaps on the top are used to remove the cartridge from its connectors without damaging the board or game.

This Hyper 64 is the later version 2 of the hardware. Its only meant to play the verses fighting games. The Other racing and shooting games require a special version of the hardware and a unique cabinet.

This photo shows the front connectors of the motherboard without a game installed. This version of the hardware is fully Jamma or MVS compatible and has an improved volume wheel which was prone to brake on the original hardware. As you can see it has the industry standard 56pin Jamma connector, just below that is a series of white Molex multi-connectors. This is optional to the Jamma edge and does the same job of power and player input as well as video and sound output. When you look underneath you can see that they connect to the same PCB lines as the Jamma edge. The five pin cable supplies the main motherboard with power from either the Jamma or multi connector.

This is a photo of the underside of the IO board. In the middle of the picture is the switch that sets the system to either Jamma or MVS. This board was a much better upgrade option compared to the first version Hyper 64 which needed extra power and sound wires installing to make the system compatible with existing cabinets. When in Jamma mode you have only mono sound, MVS gives stereo.

This video is linked to my youtube channel. Its a short display Fatal Fury: Wild Ambitions. For more videos please visit www.youtube.com/8bitplusvideos

As you can see, I am not great at this game. My main problem is that it is not as responsive as the 2D version.

The Hyper Neo-Geo 64 is a very impressive piece of hardware. It looks great in its silver case, and the games look like military ammo packs. The games have a very solid look to them, something that many Playstation games cant do. On the whole the games are quite good, but lack the depth and responsive feel that the older 2D games build there reputation on. I found my self returning to the MVS rather soon to play some KOF2003.

This was the main reason the platform failed in the way it did.  I offered very little new to the genre of fighting and on its arrival better games like Virtua Fighter 3, Taken 3 and Soul Calibur had all the attention. Still its a great find for an SNK collector, or any arcade fan. I wonder what games would have been released if things had happened differently, Metal Slug 64 perhaps…..