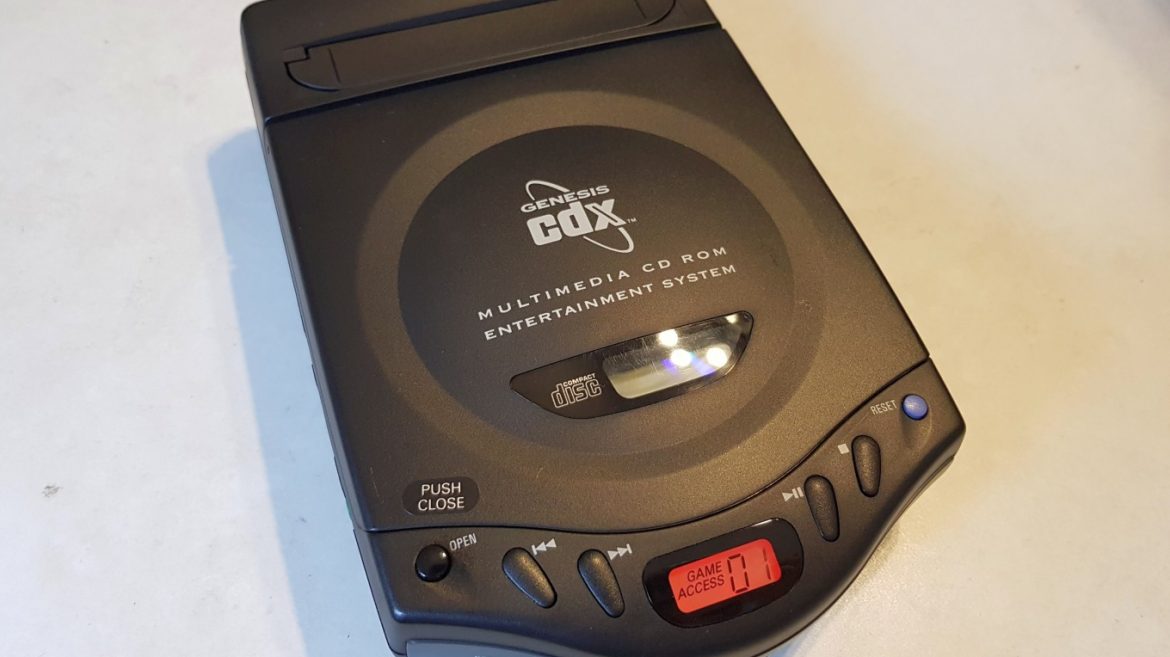 This page covers dismantling and replacing capacitors in the Sega CDX/Multi-Mega console. Removal of the Power, CPU and CD-Rom board.

Sega, being one to never to miss a trick saw a gap in the market to sell another version of the Mega-CD/Sega-CD. The CD-Rom add-on required the owner to already have a Megadrive or Genesis console. Whether you have the original Megadrive or the smaller second generation unit, you needed the expensive CD unit to combine it with. Both units required a large power adapter and interconnecting metal earth shields as well as a stereo mixing cable for older Megadrive’s.

Sega decided to launch a combined Megadrive and Mega-CD. Called the Multi-Mega in Europe/Japan and the Sega CDX in North America. The new CDX was a huge reduction in size compared to the Mega-CD combos, needed only one AC adapter and could also be used as a portable CD player when run on AA batteries. It didn’t really bring anything new or exciting to customers who already owned as Sega-CD setup, but for anyone who wanted a more “portable” setup it was quite attractive. In later years the Multi-Mega and Sega CDX have become very sort after with collectors.

I was sent this unit to replace the capacitors with new ones. This procedure is common nowadays as aged or faulty caps can lead to problems in old consoles. thankfully most Sega consoles (with exception of the Game Gear) are not generally affected by this. Although changing now should help this Sega CDX live another 25 years or more.

The first challenge it to open it up. On the underside of the console first remove the 4 large screws, and 1 smaller screw from each side and the back. The black metal base can be removed easily. Now we can see the underside of the main CPU board is covered my a large sticky backed copper foil. To remove the foil, desolder the 3 connecting points and peel back. Place this somewhere safe and clean for now.
Now we have the exposed underside of the main CPU and power board exposed. Next more screws and solder points need removing before we can detach the CPU board from the CD-Rom board.

Now the motherboard is free from the Sega-CD components. It can actually be connected and play Genesis games perfectly well at this stage. Handy for testing.

Now to remove the CD-Rom controller board and optical drive unit. This board is covered and held in place with another aluminium shield. Remove the 8 screws and gently lift off. The CD-Rom mechanism is only lightly held in place so extra care is needed when handling this part. It connects with a ribbon cable and 3 plug connectors.

I’m installing new Panasonic capacitors in this console. They are slightly larger than the originals, and in such a small console planning is required to make sure everything still fits. Luckily there was room for larger caps where the power board sits.

With the CPU and Power board done, its time to look at the CD-Rom board. The CD controller board contains the vast majority of the capacitors in this console. All of them are “through hole” type.

As I already mentioned, the Panasonic caps are larger than the originals and planning is needed when placing them when installing due to space restrictions. Some will have room to stand, others near the CD playback control switches need laying flat. I also found an area the had required some factory rework. This is right below the main power capacitors and therefore makes things a little more tricky to work around. The red wire is actually attached to a capacitor I wanted to remove. Its always wise to take plenty of photos to make sure things go back in the right place.

Reassembling is very easy when you know how it was taken apart, just reverse the process. Remember to solder together the copper foils sheets and attach the earth wires.

I then tested the console with my Everdrive cartridge, and played some CD games for at least an hour to check things are still working correctly. Then I finished off by listening to the Sonic CD soundtrack.

Finished and ready to return to the customer.

Please contact me if you have any consoles in need of repair or servicing.

Select yourself components from BitsBox and Rapid Electronics