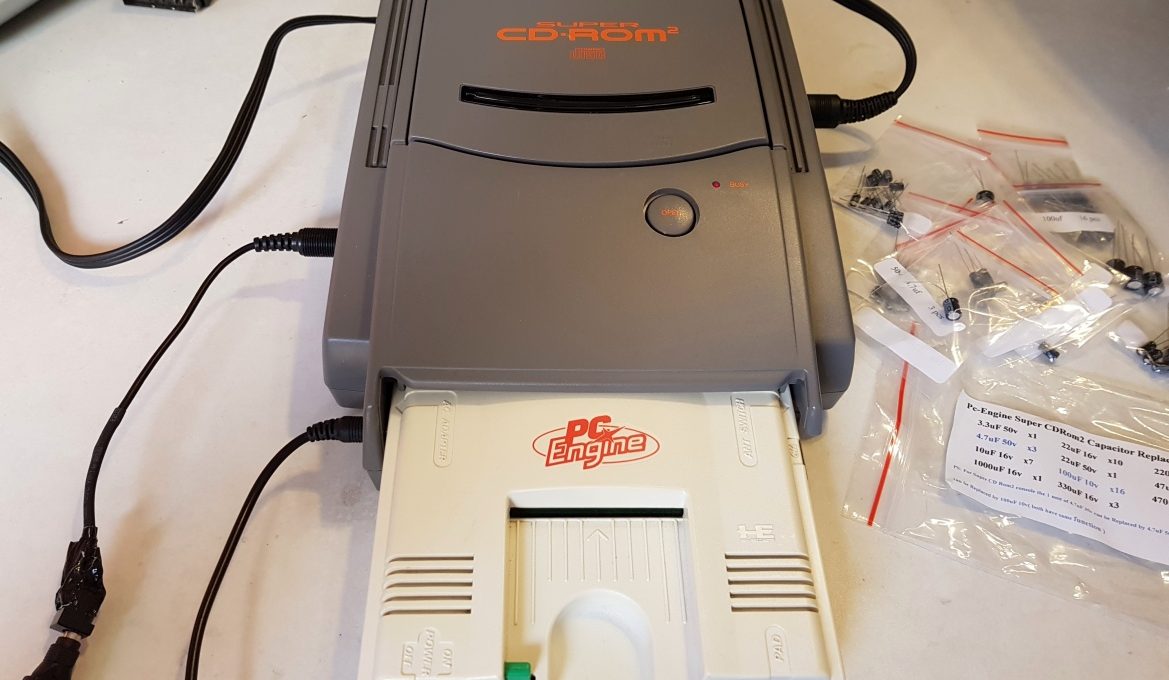 Recently I was sent a NEC Super CD-Rom2 that needed some attention. The Super CD-Rom2 is a CD drive add-on to the original PC Engine, but does not require the Interface unit “briefcase” to hold them together and provide power.

As with all PC Engine hardware, the capacitors have become an issue and need replacing. Audio is very low and needs the TV volume turning up very high to hear. Other than that it was working perfectly.

Lets take this drive apart and see how it looks inside.

After removing the case screws the top lifts off after detaching the drive access LED. Here we can see the motherboard covered with a RF shield and the CD Rom drive looks very much like the one used in the Duo consoles. You can also see a sub PCB attached to the top of the motherboard. I’ll look more closely at that shortly.

The first task was to remove the shielding from the top and bottom of the board. they were soldered on and I had to remove the one from the back to access the solder points for the front.  The sub PCB seems to contain part of the audio amp system.

The Super CD-Rom2 uses a combination of through hole and surface mount caps. Luckily it seems that none of the caps have started leaking. got to this one just in time.
Now I removed all the capacitors from the motherboard and sub PCB. the board was in very good condition with no signs of acidic damage from the caps.

I then replaced all the surface mounted capacitors with new radial lead caps. special care needs to be taken in some areas to make sure the new caps do not clash with other components when reassembling.

Now with all the caps replaced, its time to reassemble and test.

With the console reassembles. I tested it out with the game Y3 Wanderers from Ys. Its a Japanese action RPG, and not something I can recommend much as a game. the best thing about Y3 is using it to test the different apects of the NEC CD-Rom2 audio systems. It contains CD music and ADPCM voice samples. It works well as a test game.

Everything was working as it should be, and much louder than before the capacitor replacement.

If you have a NEC console that needs capacitor replacement, get in contact here.