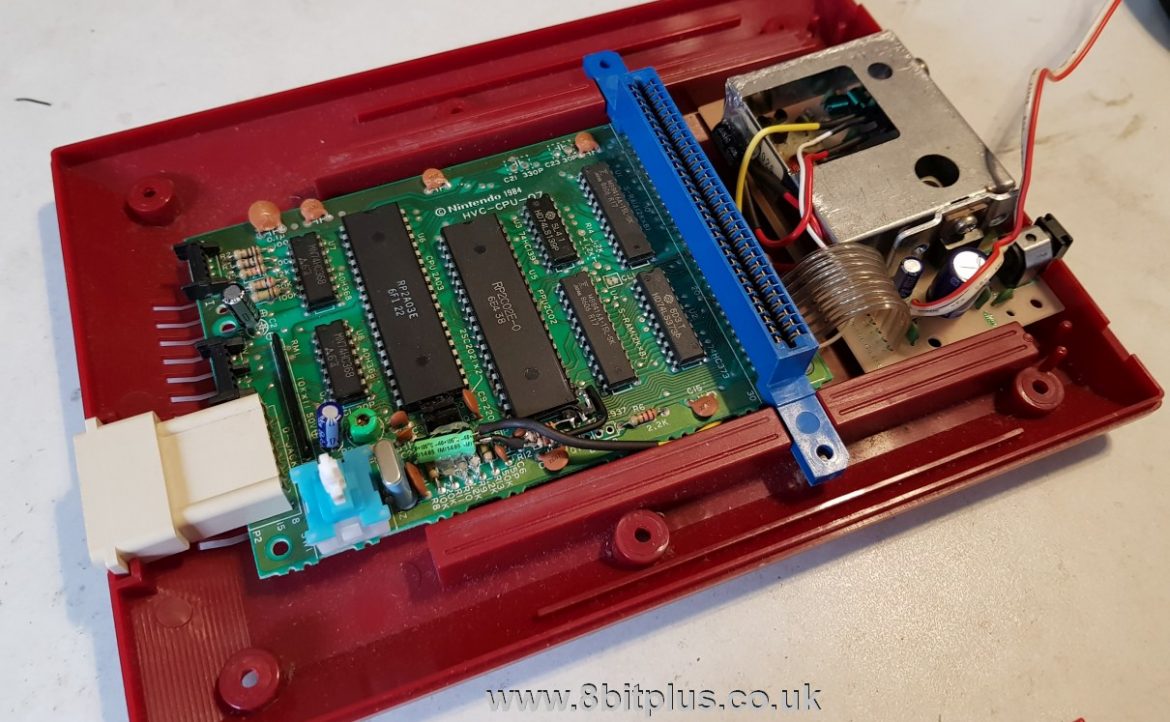 Like many 80’s consoles the Famicom only shipped with RF video output. Not many people would have TV sets capable of receiving anything else at the time ans also it reduced the component count to only support one output method.. Its also not possible to “tune” a picture in from a Faimcom as it uses Japanese RF signals no complaint to PAL frequencies. The most popular video mod for these Famicom’s is composite AV.

This unit was sent in by a customer to be composite AV modded.

This mod is very widely covered in places like the Famicom forum, http://sofaracing.co.uk/nintendo-famicom-av-mod/ and plenty of other places. I also covered it myself in a similar project here  so I wont go over it again with a step-by-step.

The customer didn’t want large phono ports mounting on the rear of the case. Instead he opted for a discrete 3.5mm jack point to carry the Audio and Video signals.

Basically the video image from Pin 21 is isolated and amplified by a transistor before feeding to the AV socket.

At the back of the console I removed the channel frequency switch and enlarged the space to fit a panel mount 3.5mm stereo jack connection.

This socket is then linked up to the video and audio mods.

Now with the console reassembled it looks very neat ans tidy. The TV connection cable is a simple stereo jack to phono lead which I also supplied.

The Famicom is known to suffer a problem called “Jail-bars” when AV modded. This is the introduction of a noise frequency to the image generating vertical lines on screen. It can be annoying, but not hard to resolve.

Firstly, I added a sliver of insulated copper tape between the PPU and the motherboard. This was then earthed. This reduced the lines slightly, but they were still visible Next I added a 220uf capacitor to the underside of the board between pins 20 and 22. This eliminated all the remaining lines.

Here you can see a short video of Kirby running on the modded Famicom. the console was reassembled and returned to the customer.

I bought a famicom from japan with the intention of getting it modded. I contacted a bunch of people asking about it and out of the few that did reply many tried to dupe me as I have never sent something off to be modded before. I found 8bitplus and saw he was in the UK so that was good but he was great to talk to always on the ball with replies and fair pricing too. When the job was done I got in Progress photos and a video showing me my console working and all that he did to it. I asked for a discreet mod and discreet is what I got and I was SUPER impressed. The console was sent back to me in great time and I got it out of the box to find that the working console I sent came back working but SO MUCH better than before. I cannot recommend Neil enough and will almost certainly use his services again.

Please contact me if you have a Famicom requiring an AV mod.